Attendance at the ASEAN Plus Three Symposium on Older Persons "Caring society for older Persons" （Sep. 6-8.2005） 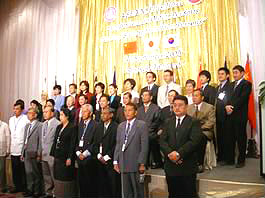 The symposium on “Caring society for older Persons” was held in Bangkok, Thailand from September 6 to 8, 2005. Government officials dealing with social security and NGO representatives of ASEAN Plus Three (China, Korea and Japan) nations attended the symposium, which was carried out in accordance with the proposal as a subsequent specific activity at the First ASEAN Ministers Meeting on Social Welfare and Development (AMMSWD) + 3 meeting in December 2004.

ILC-Japan gained an opportunity to participate in the symposium with Mr. Takashi Minagawa and Ms. Yumiko Watanabe, MHLW.

At the symposium, after the keynote speech and the status reports focusing on a specific topic from each country, an enthusiastic discussion was developed on future challenges. As the representatives from Japan, two officials of MHLW explained the basic principles regarding the revision of the Long-term Care Insurance and Social Security Systems, while ILC expressed opinions on roles and future image of NGOs in low fertility aging society. On a basis of Japan’s experiences, Mr. Minagawa pointed out the following 7 issues essential for care for older people, adding some comments.

While introducing original activities of ILC-Japan in addition to how ILC-Alliance was established and also its collaborative activities, I expressed the importance of seeking for activities that the very NGO could bear rather than taking only supplementary roles.

There is a great deal of differences in national potentiality or conditions among the ASEAN countries. In some countries women’s advance into society is not favorably received for a religious reason, whereas there remain other countries which have to give top priority to establishing infra-structure like public health. A male official in a certain country said firmly, “Older people are daily respected in my country as a result of religious lesson and education, so I am convinced of receiving sincere care by family members even I get ill.” Being sympathized with women in his country who must bear hardship as a caregiver without expressing their feeling in words, almost all the women attendees there including me, looking at each other, could not suppress a bitter smile.

Thus, it was very significant and also delightful that the chairperson concluded at the final summing-up of the meeting that the greatest trend to cope with the coming aging society would be “community care” and “partnership” between administration and NGOs.

It was repeatedly insisted in the presentations including Japan's that in order to realize “Aging in Place” mutual support in the communities is essential and close partnership between NGOs and administration would enable us to make higher quality of efforts. In ASEAN countries, due to the marked trend toward the nuclear family caused by a demographic movement from rural to urban areas and also women’s advance into society, just like in Japan in the high economic growth period, the limit of informal care have been gradually proved. I am reassured to feel that Asian countries have raised common awareness that it is necessary to establish a scheme which neither relies on only a family nor sacrifices anyone.

Through daily telephone hotline counseling by ILC-Japan as well, we understand a great many persons’ wish for“Aging in Place,”that is, to grow older in the house or in the community where they have lived for long. I am impressed to know such a wish in older age and a move to support it is creating a dynamic cross-national stream.

While low fertility is rapidly increasing in some countries like Japan and Singapore, there are other countries making efforts to create a concept of social security. It was a great opportunity to fully realize an important role Japan has to play in the ASEAN +3 framework. Additionally it was extremely significant to participate in such a meeting for the development of ILC-Japan in future.